In Eindhoven and Utrecht smart tech is tackling traffic, noise and crime. But with privacy laws proving futile and commercial companies in on the act, are the plans as benign as they seem?

Stratumseind in Eindhoven is one of the busiest nightlife streets in the Netherlands. On a Saturday night, bars are packed, music blares through the street, laughter and drunken shouting bounces off the walls. As the night progresses, the ground becomes littered with empty shot bottles, energy drink cans, cigarette butts and broken glass. It’s no surprise that the place is also known for its frequent fights. To change that image, Stratumseind has become one of the “smartest” streets in the Netherlands. Lamp-posts have been fitted with wifi-trackers, cameras and 64 microphones that can detect aggressive behaviour and alert police officers to altercations. There has been a failed experiment to change light intensity to alter the mood. The next plan, starting this spring, is to diffuse the smell of oranges to calm people down. The aim? To make Stratumseind a safer place. 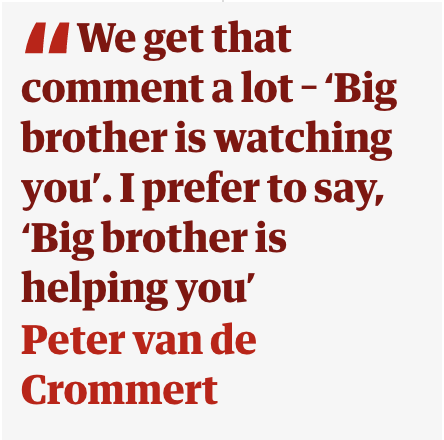 All the while, data is being collected and stored. “Visitors do not realise they are entering a living laboratory,” says Maša Galic, a researcher on privacy in the public space for the Tilburg Institute of Law, Technology and Society. Since the data on Stratumseind is used to profile, nudge or actively target people, this “smart city” experiment is subject to data protection law. According to the Dutch Personal Data Protection Act, people should be notified in advance of data collection and the purpose should be specified – but in Stratumseind, as in many other “smart cities”, this is not the ca
–
When we think of smart cities, we usually think of big projects: Songdo in South Korea, the IBM control centre in Rio de Janeiro or the hundreds of new smart cities in India. More recent developments include Toronto, where Google will build an entirely new smart neighbourhood, and Arizona, where Bill Gates plans to build his own smart city. But the reality of the smart city is that it has stretched into the everyday fabric of urban life – particularly so in the Netherlands.

In the eastern city of Enschede, city traffic sensors pick up your phone’s wifi signal even if you are not connected to the wifi network. The trackers register your MAC address, the unique network card number in a smartphone. The city council wants to know how often people visit Enschede, and what their routes and preferred spots are. Dave Borghuis, an Enschede resident, was not impressed and filed an official complaint. “I don’t think it’s okay for the municipality to track its citizens in this way,” he said. “If you walk around the city, you have to be able to imagine yourself unwatched.”

Enschede is enthusiastic about the advantages of the smart city. The municipality says it is saving €36m in infrastructure investments by launching a smart traffic app that rewards people for good behaviour like cycling, walking and using public transport. (Ironically, one of the rewards is a free day of private parking.) Only those who mine the small print will discover that the app creates “personal mobility profiles”, and that the collected personal data belongs to the company Mobidot.

Companies are getting away with it in part because it involves new applications of data. In Silicon Valley, they call it “permissionless innovation”, they believe technological progress should not be stifled by public regulations. For the same reason, they can be secretive about what data is collected in a public space and what it is used for. Often the cities themselves don’t know. 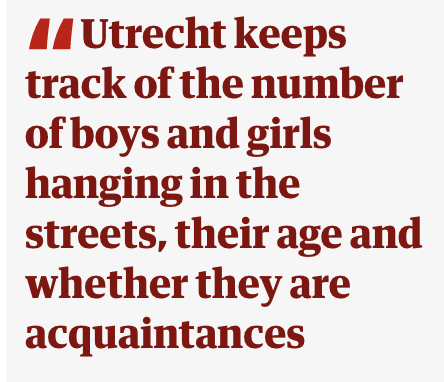 Utrecht has become a tangle of individual pilots and projects, with no central overview of how many cameras and sensors exist, nor what they do. In 2014, the city invested €80m in data-driven management that launched in 80 projects. Utrecht now has a burglary predictor, a social media monitoring room, and smart bins and smart streetlights with sensors (although the city couldn’t say where these are located). It has scanner cars that dispense parking tickets, with an added bonus of detecting residents with a municipal tax debt according to the privacy regulation of the scanner cars. But when I asked the city to respond to a series of questions on just 22 of the smart projects, it could only answer for five of them, referring me to private companies for the rest of the answers. The city also keeps track of the number of young people hanging out in the streets, their age group, whether they know each other, the atmosphere and whether or not they cause a nuisance.
–
Special enforcement officers keep track of this information through mobile devices. It calls this process “targeted and innovative supervision”. Other council documents mention the prediction of school drop-outs, the prediction of poverty and the monitoring of “the health of certain groups” with the aim of “intervening faster”. Like many cities, Utrecht argues that it acts in accordance with privacy laws because it anonymises or pseudonymises data (assigning it a number instead of a name or address). But pseudonymised personal data is still personal data. “The process is not irreversible if the source file is stored,” says Mireille Hildebrandt, professor of ICT and Law at Radboud University.
–
“Moreover, if you build personal profiles and act on them by targeting an individual person, you are processing personal data and need to comply with data protection law. Targeting based on profiling can also lead to prohibited or unwarranted discrimination.” She points to Utrecht’s plan to register the race and health data of prostitutes, which came in for heavy criticism from the Dutch Data Protection Authority.Another unanswered question regards who owns data that is collected in a public space. Arjen Hof is director of Civity, a company that builds data platforms for governments. “Public authorities are   increasingly outsourcing tasks to private companies. Think of waste removal or street lighting,” he says. “But they do not realise that at the same time a lot of data is collected, and do not always make agreements about the ownership of data.”
–

‘A smart city is a privatised city’

Hof gives the example of CityTec, a company that manages 2,000 car parks, 30,000 traffic lights and 500,000 lamp-posts across the Netherlands. It refused to share with municipalities the data it was collecting through its lamp-post sensors. “Their argument was that, although the municipality is legally owner of the lamp-posts, CityTec is the economic owner and, for competitive reasons, did not want to make the data available,” Hof says. This was three years ago, but for a lot of companies it remains standard practice. Companies dictate the terms, and cities say they can’t share the contracts because it contains “competition-sensitive information.”

Morozov’s fear about public subsidies being used for private innovation is well illustrated in Assen, a city of 70,000 people in the north of the country. Assen built a fibre-optic network for super-fast internet in 2011, to which it connected 200 sensors that measure, among other things, the flow of cars. There was an experiment to steer people around traffic jams, even though traffic in the city is relatively light.

The city also connected its traffic lights, parking garages and parking signs to this grid. The cost of €46m was split between Brussels, the national government, the province and the municipality. Companies such as the car navigation firm TomTom have used the sensor network to test new services. The project, called Sensor City, filed for bankruptcy a year ago. Now the publicly funded fibre-optic network, sensors and all, will be sold to a still-unidentified private company. The municipality will have to strike a deal with the new owner about the use of its public traffic lights and parking signs. View original article: here